Back in May of 2022 in Redding California, a runaway rodeo bull jumped over a barricade and into a large audience. The vast animal hurt several people and even landed on one young lady. The craziest part of this story is that the bull saved this young woman's life by injuring her. Let me explain...

After the woman was sent to the hospital for her injuries, the doctors found an early sign of cancer in her neck.

Video of the runaway bull below:

Paige King is the 25-year-old woman trampled by the bull, among six other injured people.

"I was sitting there with my boyfriend, and we were watching the run, and then all of a sudden, I looked to my left to glance at something, and I looked back over, and the bull was right there coming at me, so I had no initial reaction until it happened," King said. "I didn't know exactly what was happening; it took me a second. And then my boyfriend picked me up, and I was like, oh, there's a bull there."

Paige King's parents were working the Redding Rodeo event that night. When the bull jumped the gate, they were on duty to make sure fans were OK and that the bull was captured. Little did they know it was their daughter that the bull had landed on.
Paige was sent to the hospital to take care of her injuries.

"It was a panic moment. I go into looking at everybody else, but when it’s your child, you’re very worried and concerned, and you’re not sure exactly what happened. We didn’t know how badly she was injured," Paige's Father Erik Mattson said.

An even stranger turn of events happened when Paige was in the hospital.

"We brought her to the emergency room and did a CT scan of her, and the doctor noticed a lump on her neck, secondary to any internal injuries from the incident... what could be cancer at that point," Mattson explained.

Doctors discovered that Paige was in the early stages of thyroid cancer.

"I was stunned, honestly, as one of your kids discovered that they might have cancer. It... gives you chills to know that this is way bigger than the rodeo was this year," Mattson said.

Pro rodeo Hall of Famer, Bob Tallman, hear about Paige and her story and reached out to the family with helpful advice. He told them to send Paige to a cancer treatment facility in Texas where she could get specialized care.

"We made a phone call, and the doctor answered the phone on a Saturday, and we explained the situation. She said, 'you need to come down here. There's a cancer center in Houston called M.D. Anderson Cancer Center said this is where you need to get treatment."

"I'm very grateful for him and appreciate what he's done for us," Paige said.

Another crazy coincidence occurred when Paige was on her way to work one day. She works as a house cleaner, and as she was pulling up to her client's farmhouse she noticed that they had a bull in the pen.
"I was driving, and I looked to my left, and all of a sudden, I saw this bull, and he looked identical to the bull from that night, and I looked at my coworker and said there's no way."

That bull was the same bull that trampled her at the rodeo.

King captured the incredible moment on camera of the animal that ultimately saved her life. 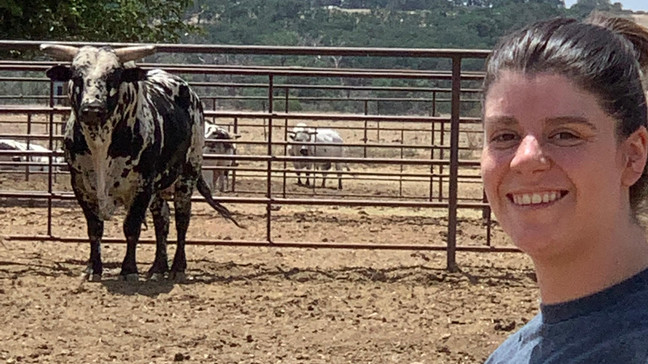 "I was able to smile about it and laugh. I was scared at first, but it was fun," King said. "It was a full circle moment, and I'll cherish it forever."

The family is hoping and asking the Northstate community for help with travel expenses as they continue the journey's from California to Texas to fight for their daughter's life.

If you would like to donate, please visit their GoFundMe page.

Where The Buffalo Roam: This Iowa VRBO Western Cabin Is On A Buffalo Ranch