A ban on critical race theory (CRT) in Iowa was signed into law by Governor Kim Reynolds in June of 2021, and it went into effect in July of the same year.

Governor Reynolds said this in a statement at the time, according to KWWL:

Critical Race Theory is about labels and stereotypes, not education. It teaches kids that we should judge others based on race, gender, or sexual identity, rather than the content of someone’s character. I am proud to have worked with the legislature to promote learning, not discriminatory indoctrination.

Now, a group of parents in the small town of Oskaloosa, Iowa, are working to fight back on what they believe to be the introduction of CRT to their children. According to the story put together by Iowa Starting Line, one of those parents "who opposes the Wit & Wisdom curriculum being considered, emailed people which sections she doesn’t think are appropriate. ... Her list included the Civil Rights Hero section for second-grade students that features materials like Rev. Dr. Martin Luther King Jr.’s I Have A Dream speech, and Ruby Bridges, the first student to desegregate a public school in the south in 1960."

A copy of the list was shared with Starting Line: The parents of the second graders believe that the previously-mentioned topics are inappropriate for seven and eight-year-olds. Those in the group are asking other parents in the school district to watch the following YouTube video that was put together by Moms for Liberty, a group that claims its mission is "fighting for the survival of America by unifying, educating and empowering parents to defend their parental rights at all levels of government."

In a separate email, another parent claimed it was 'child abuse' to teach children of the following subjects they see in the curriculum. It's also attached here, thanks to Iowa Starting Line: 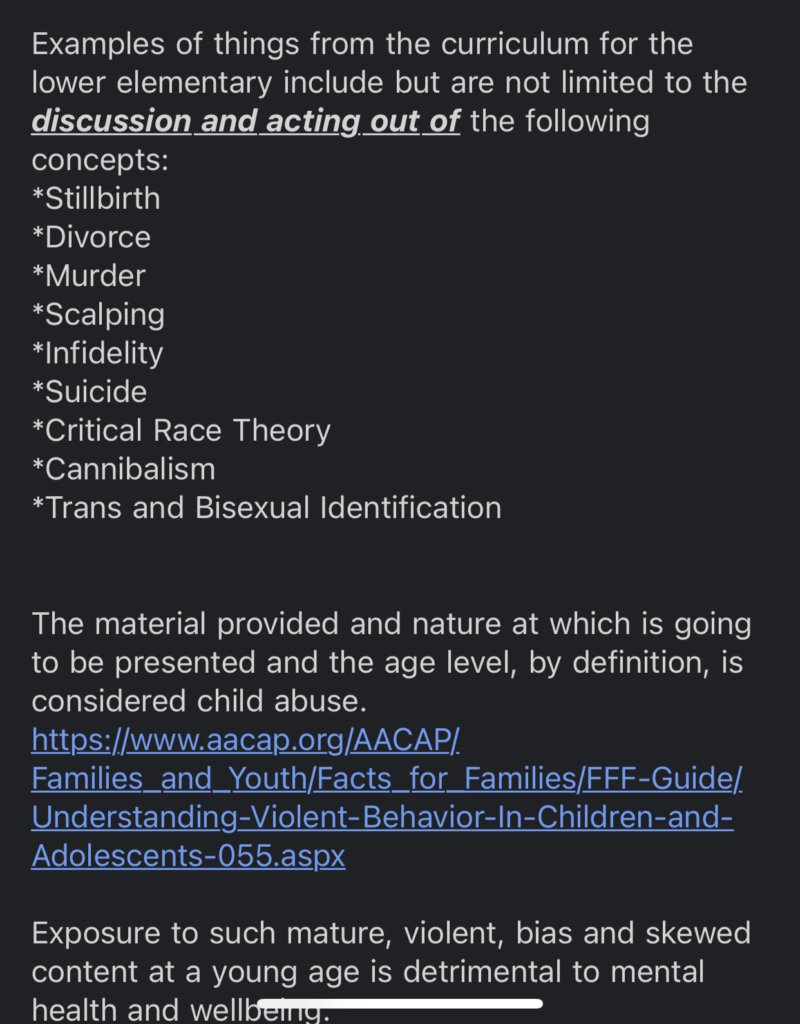 Chad Colby, who is a spokesperson from the company that put together Wit & Wisdom had this to say on the subject:

Wit & Wisdom is a K-8 curriculum building knowledge, skills, and character that features much-beloved, award-winning books from both contemporary and established authors, many of which parents will remember from their own childhoods. The books, which introduce kids to facts about US history, the arts and sciences, and values including strength, compassion, and resilience, are chosen to match different ages and grade levels.

At a time when U.S. elementary reading scores need improvement and reading for fun is less common among kids, these time-tested and commonly used materials instill a love of the written word, build general knowledge, and prepare young learners for future schooling and careers.

The educational content that is under scrutiny can be viewed here.

The school board will vote on the matter at hand on Tuesday, Feb. 8.

Largest Skatepark In America is in Iowa

A work in progress for several years, last spring saw the opening of Lauridsen Skatepark in Des Moines. Measuring up at 88,000 feet long, this is the largest skatepark in the entire country.

The Ida Grove Foundation had enough of watching the building crumble. Put together by a group of passionate people, The KING Theatre has returned to its glory days.
Filed Under: Iowa Critical Race Theory, Iowa News, nl
Comments
Leave A Comment
Back To Top